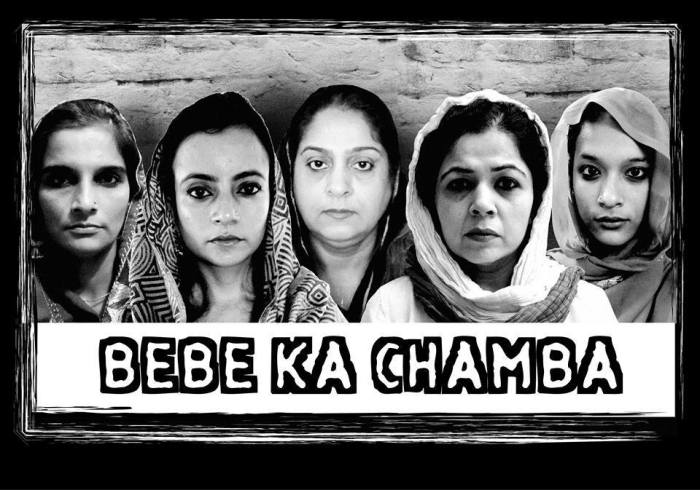 Translated and adapted by Neena Wagh, A Katyayani Production

On Tuesday March 17, I saw a play in the Punjabi language; a first for me. Bebe Ka Chamba (The Lady’s Nest) is a Katyayani Production directed by Sohaila Kapur, based on a Spanish play by Federico Garcia Lorca entitled ‘The House of Bernarda Alba’, a study of six women in mourning who are not allowed contact with the outside world.

I arrive 45 minutes early to the Shri Ram Centre at Mandi House in Delhi, thinking I have too much time to kill, and will find a place to grab a coffee. But when I enter the arts centre there is a long line of people heading in the direction of the theatre, and most of the seats are full. By the time the play begins it’s a full house with people sitting in the aisles and standing at the back. I feel lucky to get a decent seat on the 5th row, and it’s free. The performance preceding this was at another venue hosted by the Spanish Embassy on International Women’s Day, his show is part of the Sahitya Kala Parishad’s Festival of the six best plays of Delhi; I have high expectations.

The play is 90 minutes long and I have no idea where the time goes. I wipe a tear from my eye at 8pm when the audience applauds and the brilliant female cast of 8 Punjabi women take a bow. Bebe Ka Chamba is set in 1948 in newly partitioned Punjab. A houseful of women including mother, daughters and servants are mourning the death of the patriarch of the family. Four nubile daughters are instructed to remain housebound for an unknown amount of time by Bebe, the matriarch of the family. As the heat within the four walls increases, so does the sexual frustration of the girls who are forbidden contact with men. The turmoil created by the partition transforms into the turmoil within, as the young women battle seclusion, subjugation, rising sexual desires and a longing for freedom.

The scenes are woven together by songs and sometimes some simple traditional Punjabi dancing. This is very effective and the depth of the lyrics and voices are a strong vehicle for putting across the range of emotions, loss and heartache felt by the women, young and old. The set is basic and the lighting mostly dark and gloomy, illustrating the mood in the house. The girls are dressed in simple white salwar kameez, some embroidered with sequins and shiny embroidery, that appear very bright amongst the numb ambience, sparkling under the stage lights, representing their innocence, youth, and beauty.

It’s difficult not to be moved by the story and the lives of these females, especially as the tears shed by the women are just a drop in the ocean of what actually occurred, and the effect on millions of Pakistani and Punjabi women post partition in India. Lives were lost, women were left widowed, childless, motherless, raped, beaten, lost and scared. The effects of partition for many men and women continues, as well as remaining scars left by conflict and disruption that ‘Bebe Ka Chamba’ poignantly unveils.

One thought on “‘Bebe Ka Chamba’ – Punjabi Theatre in Delhi”